The top hotel filming locations from the world’s favourite films

Have you ever watched a film and thought, ‘wow, I want to visit that hotel’? We know, silly question – of course you have! TV series and blockbuster hits can catapult destinations and resorts into the mainstream. Just take Iceland and Dubrovnik and the masses of Game of Thrones fans who visit annually. And then there’s New Zealand and its hordes of Lord Of The Ring followers. But what about hotels? Well, it’s the same. Just like those who visit New York hunt out that Friends building, there are plenty of hotels that have been immortalised by cult classic films. So, we’re calling all movie buffs with this tour of hotel filming locations from the bright lights of Las Vegas through to the maze of waterways in Venice. 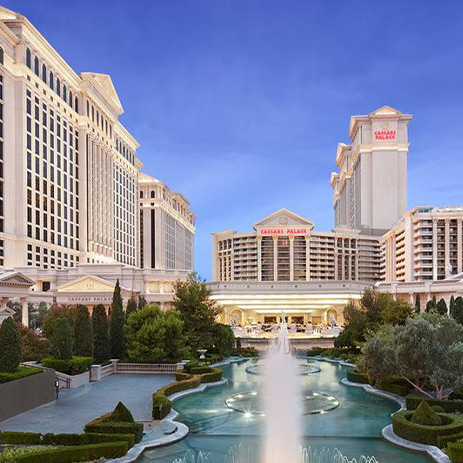 Caesars Palace
Las Vegas, NV, USA
This hotel has appeared in countless blockbusters but perhaps its most notable presence is in The Hangover (2009), starring Bradley Cooper, as the hotel where ‘The Wolfpack’ check-in for the stag do that turns horribly wrong… and they return in the third instalment of the trilogy. Its other notable credits include Dreamgirls (2006), Iron Man (2008), The Big Short (2015) and Rain Man (1988). 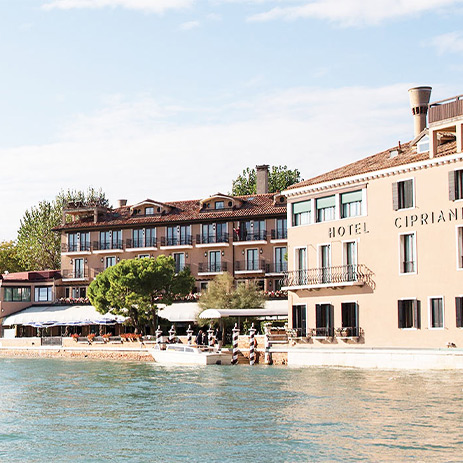 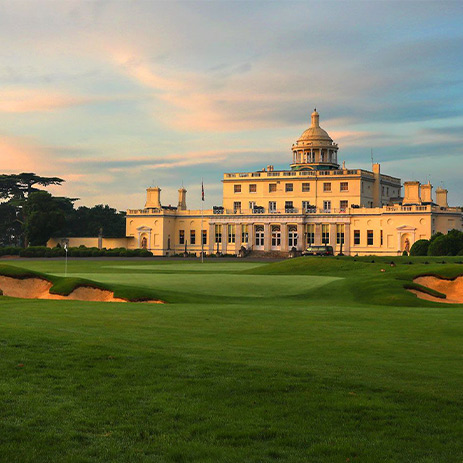 Stoke Park
Buckinghamshire, UK
Sticking to the Bond theme, this stunning country manor hotel is where what’s considered to be the most famous game of golf in cinematic history took place in Goldfinger (1964). Bond returns to this hotel, played by Pierce Brosnan, in Tomorrow Never Dies (1997) while Hugh Grant whisks Renée Zellweger away to Stoke Park for a romantic mini break in Bridget Jones Diary (2001). Guy Ritchie is also a fan and used the hotel when directing Layer Cake in 2004 and returned four-years later to film film Rocknrolla (2008).

Jumeirah Zabeel Saray
Dubai, UAE
The film that brought us that tense scene where Tom Cruise scales the outside of the Burj Khalifa, Mission Impossible: Ghost Protocol (2011) was also filmed in the emirate’s hotel Jumeirah Zabeel Saray. In the movie, the team travel to Mumbai, however the scene is actually filmed on Palm Jumeirah in the hotel’s lavish lobby where its recognisable colourful fountains feature. 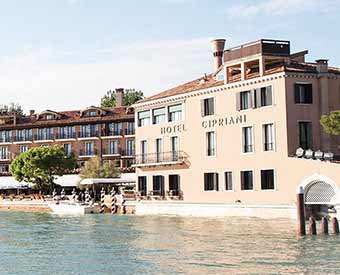 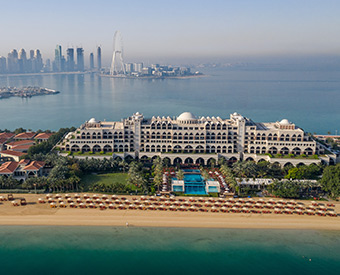 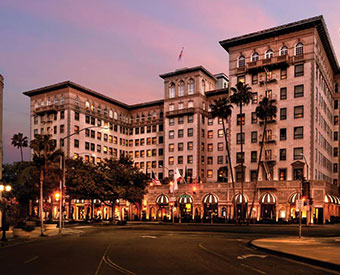 California, North America
Call us on 0203 816 0985 to start planning your trip
To book or customise this trip call us on
0203 816 0985
Lets PLAN YOUR TRIP VIEW THIS PROPERTY
view more PROPERTIES 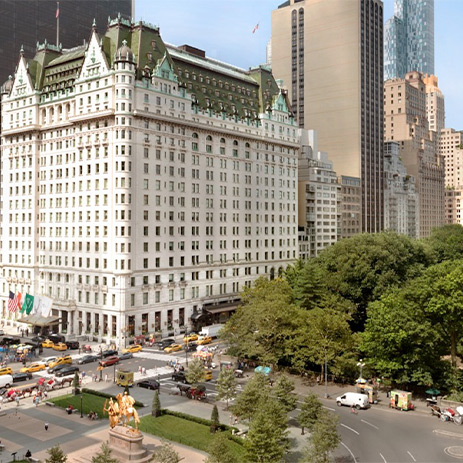 The Plaza Hotel
New York City, NY, USA
With enough film credits to deserve a star on the Hollywood walk of fame, The Plaza Hotel is probably most known for being Macaulay Culkin’s place of stay in Home Alone 2: Lost In New York (1992). It was also the wedding location that Kate Hudson and Anne Hathaway are fighting for in Bride Wars (2009) and has also appeared in classics such as Sabrina (1954), Funny Girl (1968) and The Great Gatsby (1974). 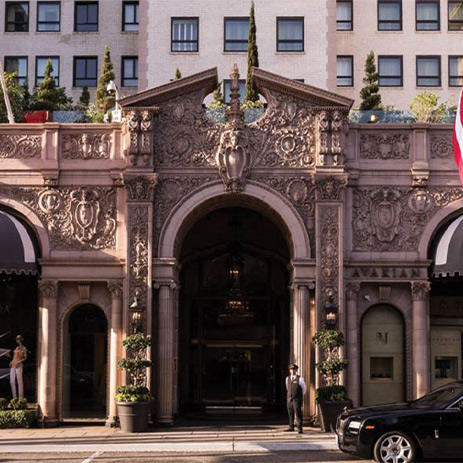 Beverly Wilshire, A Four Seasons Hotel
Los Angeles, CA, USA
Forever known as the set for Pretty Woman (1990), this Hollywood landmark has a special place in everyone’s heart as the hotel where Edward and Vivian, played by Richard Gere and Julia Roberts, fall in love. Overlooking Rodeo Drive, if you’re travelling to this corner of the world, not visiting this hotel would be a “big mistake… huge.” 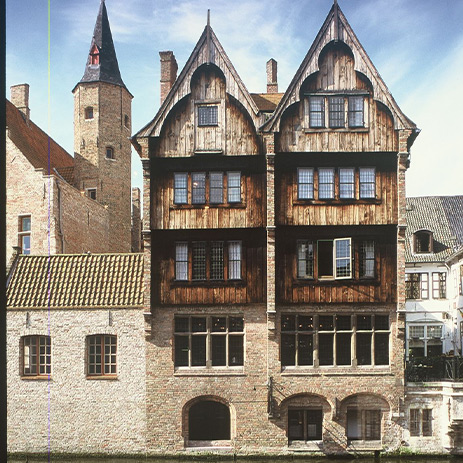 Relais Bourgondisch Cruyce
Bruge, Belgium
The location for the majority of In Bruges (2008) starring Colin Farrell, this enchanting boutique hotel is in the centre of the city located on the waterfront where two canals cross. 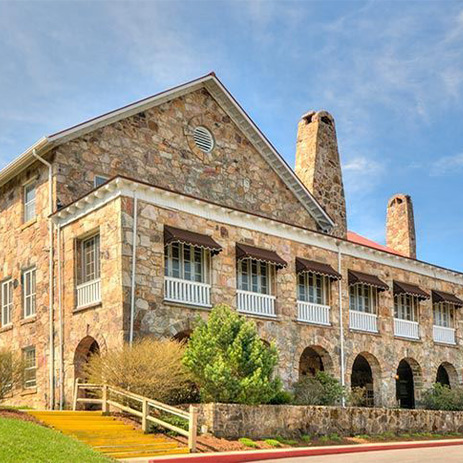 Mountain Lake Lodge
Pembroke, VA, USA
Nobody puts Baby in the corner at this lodge, one of two filming locations for the fictional Kellerman’s Resort in Dirty Dancing (1987). The Mountain Lake Lodge is home to Virginia Cottage (Baby’s cabin) and offers Dirty Dancing themed weekends for fans of the film that include fun activities such as a watermelon toss, scavenger hunts, dance lessons and an evening reception in Mary’s Barn. 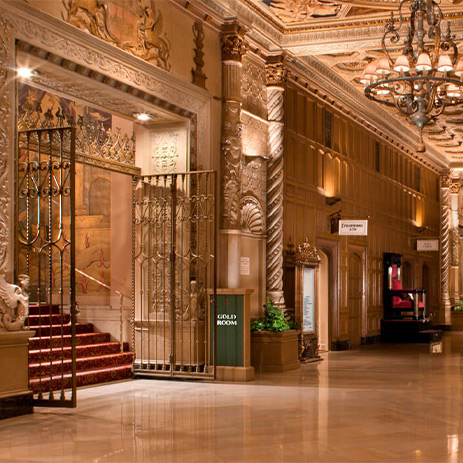 Millennium Biltmore Hotel
Los Angeles, CA, USA
Hollywood has had a long fascination with this hotel, and its certainly racked up some big name credits since the 70s. Some of our favourites include Ghostbusters (1984) and Beverly Hills Cop (1984) which used the hotel’s Music Room and Rendezvous Court as their stage. However, perhaps it’s biggest film credit to date, Millennium Biltmore Hotel’s indoor swimming pool also appeared in Cruel Intentions (1999) 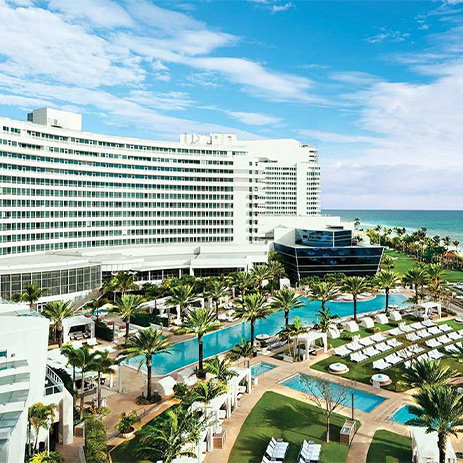 California, North America
Call us on 0203 816 0985 to start planning your trip
To book or customise this trip call us on
0203 816 0985
Lets PLAN YOUR TRIP VIEW THIS PROPERTY
view more Properties